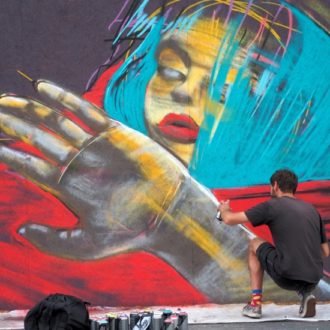 The painting of QSB plates, master classes, thematic films review, a lecture by a Polish artist Błażej Rusin, a photo exhibition and creation of two murals – such is the program of the festival of urban art Polychrome, which takes place in Lutsk on June 28.

The managing partner of the gallery of Ukrainian modern art Art Kafedra Lesia Korsak, told that the Polychrome festival was launched in 2016.

“The festival of urban art is very necessary for Ukraine. Every year such events take place not only in big cities, but also in small towns. Ukraine is heading for Europe, and we can not lag behind, so we organize this festival. Urban art is an art of the city, of a modern space”, – Lesia Korsak noted.

She emphasized that it is precisely this kind of art that can be accessed by a contemporary audience, since it opens up the pressing problems of the present.

“Urban art gives an impetus, makes keep pace with time, teaches people to be open, sincere, kind,” Lesia Korsak said, and announced that created during the second festival Polyhrome murals will be the part of the future Museum of Contemporary Art, which will start  its activity on the basis of the Art Kafedra in August this year.

In the framework of the festival Polychrome a photo exhibition “Writers files” is in effect in the art cafe Stop Kadr.  It contains graffiti created in different Ukrainian cities, including Lutsk, during 1997-2013.

“These photos belong to the private collection of Lutsk graffiti-writer Cik one and are presented in only one copy. These graffiti, unfortunately, have not been preserved on the walls, but such is the fate of art of graffiti – it can not live long. There are new graffiti, the old drawing”, – the manager of the gallery of contemporary art Art Kafedra Olena Koretska told.