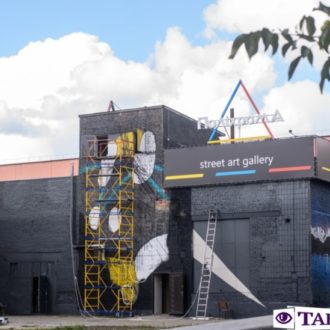 Soon on the territory of the culture and entertainment complex Adrenalin City there will be another author’s mural from the famous artist Sergei Radkevych. The work will be included in a series of works created during the urban fest Polychrome, which took place at the end of June this year.

Sergei tells that this will be a gigantic image of the legs, not devoid of multilayer content.

“Giant legs, which will necessarily be different from the plane of the entire wall, can remind someone of Jesus’ crucifixion. In the end, this makes sense, because I refer myself to a Christian culture, but here, as with the canvas of Rene Magritt, where a tube with the signature ‘it’s not a pipe’ is drawn. That is, everyone can see something in this mural.”

The author is convinced that these wall-paintings will become a symbol of justice and in a global way:

“This is very symbolic: a hint of Christian culture in the post-Soviet building of the period of total atheism – a kind of return of justice, as the harmonization of space and meaning. So, for someone, it’s really a crucifixion, but I did not declare it in this way.”

When creating an ant, the author read a non-format lecture “Private Anthropology. Artist of the Space”, in which he introduced his favorite canvases and installations, bold experiments of contemporary artists and shared his thoughts on art in general.

You can see the completed work very soon. We remind also that on August 24 at 17.00 p.m. in the Adrenalin City there will be a ceremonial opening of  the unique Korsaks’ Museum of the Contemporary Ukrainian Art.