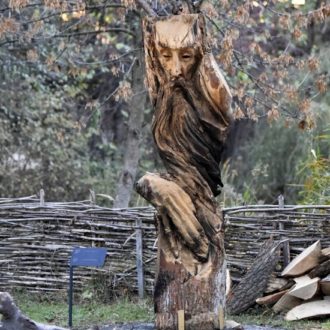 A landmark event took place in Lutsk on November 1st. « −  a new interesting and unique location« Adrenalin» sculpture park  arose. About two hundred people came to the opening of the first stage of a large-scale art project.

More than fifty exhibits were born at the hands of masters from around the world as part of the first international Korsak Carving Festival. The festival lasted at the end of August and was timed to mark the anniversary  of the Korsaks’ Museum of the Conemporary Ukrainian Art and the 10th anniversary of the Adrenalin City Cultural and Entertainment Complex. Curator  of the project was  young sculptor Ilya Lypka.

Before launching the KMCUA founders and partners laid down an Alley of Trees, on which the first oak was planted by Lesya and Victor Korsaks.

According to the museum’s managing partner Lesya Korsak, 19 sculptors, not only from Ukraine but also from Europe have created some of the sculptures within the Korsak Carving Festival. But even at the end of the festival, other sculptors joined the work. In order the park to serve for a long time, each sculpture is covered with a special varnish.

She also stressed that this is only the first phase of the park, with plans to expand it every year, complementing sculptures made of metal and other materials.