The Korsaks' Museum of Modern Ukrainian Art > Events > THE PICTURES, YOU WOULD LIKE TO TOUCH, WERE SHOWN IN THE LUTSK MUSEUM

THE PICTURES, YOU WOULD LIKE TO TOUCH, WERE SHOWN IN THE LUTSK MUSEUM 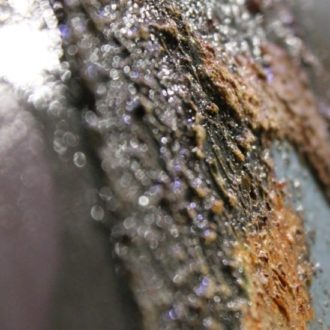 The exhibition of works of the Kyiv artist Mykola Zhuravel was brought to the unique Korsaks’ Museum  of  Contemporary Art.

The participant of many exhibitions’ projects and performances in Ukraine and abroad, the creator of the so-called “Zhuravel’s Gold” and painting projects, on the topic of the beekeeping and ancient totem animals, conquered the Lutsk lovers of the beauty from the first artistic acquaintance.

The hall of the variable exposure was jammed!  The flashings of cameras, people with smartphones, which have a live broadcast in the social network, many selfies with the artist in front of his work’s background. This was surely one of the most popular openings of exhibitions in this creative space.

“Soul of the museum”, its managing partner, Lesia Korsak, noted that she and her husband Viktor Korsak are proud of the opportunity to have diptych of  Mykola Zhuravel  in their collection .

“At each canvas of this author you fall into a metaphorical, urbanized world, a cosmic and a new one and at the same time into the ancient times, close to the jugs and bulls … Each picture is the depth which inspires you so much that you wish to create, organize new projects and be proud of how rich we Ukrainians are. We are trying to perform the main function of the museum, and to show people how talented contemporary artists are, who do just as it is for contemporaries! “─ Mrs. Lesia told.

Before the opening art critic Zoya Navrotska managed to go through the hall and listen to what one says   about the creativity of  Mykola Zhuravel:

“It is spoken much that the works are cosmic, that it is an impression that they were created during the” clash of the Titans. “They call the works sacred, endowed with energy, which pulsates and fills up. Especially impressive is the author’s technique of lengthy, so everyone asks what is the value this beauty. ”

The whole creative “army” of art critics, artists, critics and lovers of beauty from Kyiv and Lviv came together   with the artist.

“The impression is, that there is nothing impossible for Zhuravel! There are legends about him; on his birthday, for example, he assembles a huge ship and rides everybody along the Dnipro, just think!  In Venice, he is exhibited not only on the channel, but in the ancient church of the 16th century. From his project related to bees, the impression is spectacular, if to speak metaphorically. This is something very complicated in a very simple way – and vice versa. ”

Mykola Zhuravel came to Lutsk with his wife, not avoiding the compliments from the public as to what a wonderful creative family they are, and Zoya Navrotska noticed that the beloved woman for the artist is always the support, which is considerably helpful in creativity.

“I would like to say” Glory of the Hero! “about those people who refer to culture and support it. This museum is already appreciated and will be appreciated all over Ukraine, because there is not such a place anywhere. There is “Arsenal” in Kyiv, but it is a state structure, and as for the private one, the Tereshchenkos philanthropists are mentioned at once, and the fact that such forms of art support are inherent in our nation. And fortunately, that this is going on! Since many important works of contemporary artists are scattered in private collections, ” Mykola Zhuravel added.

The Head of the KMCUA Kateryna Ganeichuk named the works of the artist ” the iconic memories of humanity.”

“It seems to me that if the intelligent people ceased to exist, it would be possible to recreate a beautiful postcard-memoir after the works of this author”.

And then there were dozens of autographs, hundreds of frames of cameras and phones, conversations with a glass of wine and leisurely entertainment on the theme of contemporary art. The guests stayed for a long time, and all who did not have time to visit the exhibition of  Mykola Zhuravel can do it until November 5th.