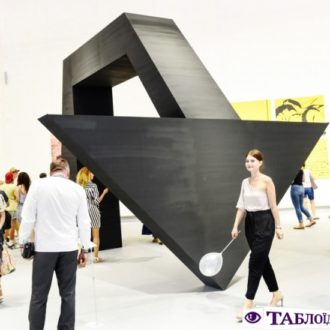 More than 800 objects of painting, graphics, sculptures, installations, video art, more than 100 Ukrainian artists of the XX-XXI centuries, innovative technologies and large-scale space –  the only one in Ukraine the Korsaks’ museum of the contemporary Ukrainian art officially started its activity in Lutsk city.

The official opening of the unique art space at the Adrenalin City has brought together hundreds of Lutsk city citizens, adherents of high art and creative society.

The honor of conducting an official ceremony fell on art critic, director of the Lutsk Art Museum Zoya Navrotska. She noted that it is very symbolic when the museum of such a level opens on Independence Day, because each artist interprets freedom in its own way and creates in a special way the new history of this country.

The most congratulations, warm words, flowers and gratitude came this evening to the family of patrons of the Korsaks, who became the founders of a unique museum. Mariya, a famous writer Ivan Korsak’s wife, who died last year, admitted that did not almost  see Lesia and Viktor at home, as they “seemed to be the harvesters in their work.” 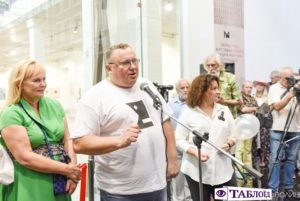 “The museum is a place of culture, art, science. This is an institution where art is cultivated, and the purpose of this museum is the development of contemporary Ukrainian art, its popularization. We are constructing a museum institution of the highest level, which changes the past, reflects over the present and creates the future. We also are eager the Ukrainians to understand what modern art is. That is, we want to organize a kind of bilateral movement: to bring people closer to art on the one hand, and on the other to bring art closer to people,” said Viktor Korsak, founder of the museum, chairman of the Board of Directors of the Group of Companies VolWest Group.

“I realy love Antoine de Saint-Exupery and in particular his Code of the Little Prince, who says that in the morning, after you got up and cleaned up yourself, you need to clean up your planet. We must remove our Ukraine from ignorance; purify our souls, our city and our state. It was for this purpose that the Korsaks’ Museum of Contemporary Ukrainian Art was created, for this we gave him our surname in order to assume responsibility for its development”,  added Lesia Korsak, the managing partner of the art gallery Art Kafedra.

“We finally appeared on the cultural and artistic, as well as on tourist maps of the world. Stay with us, support us, and we will do our best”, – promised the artist, designer, and recently the young director of the museum Kateryna Ganeichuk.

The secretary of the city council, the executor of the powers of the mayor, Grygoriy Pustovit, who congratulated everyone on Independence Day and shared his impressions of the museum, did not stay away from the grand event:

“Every kind of art, every direction in art starts as modern, and after a while it becomes a classic. So today we open the museum of the future! We know that, thank God, in our city there are many families of businessmen who give entertainments, shopping centers, beautiful buildings to the city… I thought: entrepreneurs of the past, who do we know? Who built the stores? No, we do not remember them. The Tereshchenkos’ family, who were patrons who gave much to Ukraine, those who moved the intellectual sphere, remains in the memory. So, it is great, that there is the Korsaks family in our city, the family that created, creates and will create a history of Lutsk.

On the occasion of the opening of the museum, he handed Viktor Korsak  the gratitude of the mayor for his honest work, active public position, a significant personal contribution to the development of the city of Lutsk and the development of the Ukrainian independent state, as well as on the occasion of the 27th anniversary of Ukraine’s independence.

The guests who came to the opening from different corners of Ukraine have repeatedly noted that a very powerful tourist and artistic “highlight”, appeared  in Lutsk because every person who considers himself a conscious citizen, has at least once in his life to visit the museum, where the best works of special Ukrainians are  collected. 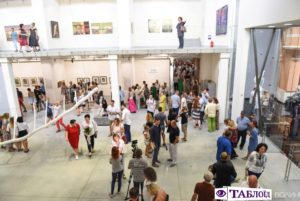 The museum complex stretches for 3,5 thousand square meters of the exhibition area, it consists of a permanent and variable expositions. Art space includes 12 halls with works representing Lviv modernism of 1930s-1960s, Odessa nonconformism of 1970s-1990s, neo-modernism of Ternopil, Ivano-Frankivsk and Lviv  of 1980s-1990s, alternative associations of Kyiv in 1960s 1990s, the geometric circles of Lviv, Lutsk and Uzhhorod of the 1970s, topical contemporary art, etc.

Visual content, ideological decisions, thematic vectors of works are impressive: here you can find unique examples of early Ukrainian modernism, bright conceptual installations, and the attraction of innovative technologies of video art, audio resources and QR coding. The art has long ceased to be static and ossified; it can be touched, downloaded to your mobile, searched  in a small room with white walls and a subtle light of the projector, to find something new in the works every time.

The KMCUA is a spatial sense of practical sensualism, ironic images of social rudiments of the Soviet era, coding itself as one of the important structural elements of a nation, unique artistic preferences and to feel as a person who feels responsible for the future. And this is just a drop in the sea of colors, textures, fragments, senses, visions and ideas that are hidden in a unique museum, whose value is hard to comprehend for the first time visiting.